A family-friendly adventure for characters 1st to 4th levels 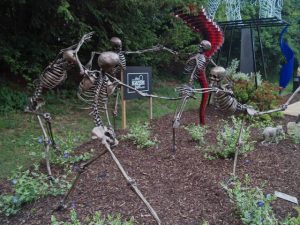 This adventure is intended for up to 4 characters of 1st to 4th level. This adventure relies on role play, exploration and problem-solving. There is the opportunity for combat or creative avoidance of combat at the end of the adventure. Should the party prefer more combat, feel free to add bandits on the road to the festival.

This adventure was inspired by the sculpture Can We Stop Now, see the photo, and the Mexican holiday Dia Los Muertos. While the adventure features skeletons and ghost, the focus should be on how the living have come to love and celebrate them.

The party encounters multiple groups of travelers and merchants along the road, all of whom are on their way to the town of Skelerberg for the annual Skeleton Dance Festival. The travelers are very excited to attend. Each year, for five days an entire army of skeletons rises from their graves to dance. Merchants are bringing many kinds of skeleton themed products, including sugar skulls, tombstone cakes, skeleton beads, pretzels, costumes and much more.

The central attraction of the festival is the large field outside the castle where dozens of skeletons will rise from the ground and dance together every night from sunset to sunrise for 5 days. The skeletons are the remains of an invading army that once laid siege to the castle and were cursed by the king’s wizard. The wizard and his apprentice cursed the soldiers to dance non-stop for five days. After five days, the entire army was dead. Now the army is cursed to rise and replay the macabre dance on the anniversary of the battle every year.

In the generations since the battle, the two kingdoms have become friends and people from both kingdoms come to watch the dance and remember the fallen warriors. Children and adults dress in skeleton costumes and join the dance in hopes that one day they will find a way to break the curse and allow the warriors to rest in peace.

The party must find a way to remove the curse and set the skeletons to rest. Speaking with locals will reveal clues from the list below. The party must infiltrate the castle and find a way to dispel magic on the casting circle at the top of the wizard’s tower and destroy the wizard’s focus that was used to cast the spell. The focus is a crystal sphere stored with the king’s jewels, under heavy guard.

Destroying only one of the two artifacts during the festival will create un-unforeseen consequences. Waiting until after the festival to destroy the artifacts would be easier, but would cause disappointment at the next year’s festival when the skeletons failed to rise and dance.

While the monster manual lists skeletons as lawful evil, these skeletons retain their original alignment. The curse compels them to dance, even if attacked. If they are attacked, they will fall to pieces and the bones will disappear into the ground.

The skeletons are as intelligent as they were before they died and understand any languages they knew when living, including Common. Once released from the dancing curse, the will be surrounded by the spectral energy of their ghost and will be fully capable speaking with PC’s and NPC’s.

These skeletons were once well-trained soldiers and are able to use any martial weapons that they may find to defend themselves if they are attacked after the dancing curse is removed.

Removing the curse requires that the Orb of Mel be placed inside the Circle of Mel. Then the orb must be crushed and the circle must be broken to completely remove the curse. If this is done while the skeletons are dancing here are three suggestions for how to roleplay the scene and wrap the adventure:

Destroying the orb without out destroying the circle breaks the dancing skeleton portion of the curse; however, the spirits of the soldiers will still be trapped in the Circle of Mel.

Destroying the Circle of Mel without destroying the Orb of Mel will release the spirits of the soldiers. After the dancing stops, the ghosts will haunt the castle and surrounding grounds.

Prince Henry is an idealist who believes that the power of the king is derived from the people he rules. He wants very much to end the curse on the skeletons, but his father has forbidden it. The king has also forbidden the prince from revealing the secrete of removing the curse to anyone. Only after Prince Henry is convinced the party is capable of succeeding will he reveal the secrete to them.

King Malovar is old, sickly, and very stern. He is determined to fill the kingdom’s treasury with as much gold as possible. He believes his son is weak and will need as much gold as possible to raise an army to defend the kingdom when his son becomes king. While he is very abrasive and short with people, he is a loving father who wants to leave his son with a stable kingdom.

The party will encounter 1d6+1 merchants or groups of tourists on the road to Skellerberg per day.

The large number of merchants and travelers on the road to Skelerberg attracts bandits. There is a 25% cumulative chance of encountering bandits or thieves for every day the characters spend on the road to the festival.

The castle grounds are heavily guarded and patrolled during the festival. There is a 25% chance that the characters will encounter one or more guards for every ten minutes they spend in the castle. Guards are posted at all of the gates and entrances to the castle.

There is a 5% cumulative chance per hour that the party has a run-in with a pickpocket or thief while shopping/walking at the festival.

Below you will find a description of various magical and non-magical items the characters will likely encounter during the adventure.

Orb of Mel
The wizard Mel once used this crystal orb as a magical focus. The evil necromantic energy he used to curse an invading army corrupted the orb and turned it ruby red. Any character that touches the orb while it is glowing (5 days encompassing Halloween and Day of the Dead) will be cursed. Cursed characters will hear the voices of the dead and ghosts will be attracted to them. The non-stop pleadings of the ghosts for help to resolve their earthly problems will slowly drive the character insane. If a dispel magic or remove curse is used on the orb, it will stop glowing until the next anniversary of the battle. A remove curse is require to cure the character of the curse.

While glowing the orb can be crushed using normal objects such as a hammer or rock. See the section on removing the curse form more information on what happens next.

When the glowing stops, the orb is protected by a permanent Resilient Sphere spell, which requires a Disintegrate spell to remove. Placing the Orb of Mel inside the Circle of Mel at any time will temporarily disable the resilient Sphere spell on both artifacts.

Circle of Mel
Within the wizard’s tower of the Skelerberg Castle is 5 foot iron circle with magical ruins inlaid with silver. This is a permanent Magic Circle created by the wizard Mel, which he used to capture the spirits of an invading army of soldiers. During the 5 days of the skeleton dance, the spirits are forced to rejoin their skeleton bodies. At the end of the 5 days, the spirits are drawn back to the circle and trapped there.

While glowing, the circle can be damaged or destroyed using normal objects such as an ax or crowbar. See the section on removing the curse for more information on what happens next.

When the glowing stops, the circle is protected by a permanent Resilient Sphere spell, which requires a Disintegrate spell to remove. Only the Orb of Mel can penetrate the Sphere while the Resilient Sphere is active.

Below you will find links to various sources for maps that could be used for this adventure. Feel free to make your own maps or integrate this adventure into your own homebrew setting.