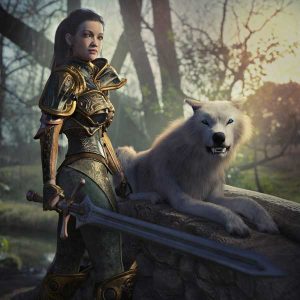 This adventure is intended for up to 4 characters of 1st to 4th level. This adventure relies heavily on exploration, role-playing, and has ample opportunity for combat. This is a wilderness exploration adventure (i.e. hex crawl) centered on escorting Mom on her mission to find a missing child.  Numerous random encounters are available in addition to combat, survival hurdles, and role-playing opportunities.

With the sun low in the sky, you arrive home from your most recent adventure, to find Mom putting on her armor. Her sword and bow are on the kitchen table. Hearing the door open, she spins rapidly to see you standing in the doorway. A look of hope fades quickly. A short flash of a smile is rapidly replaced by a look of determination.

“Don’t bother unpacking. Caleb is missing. A couple of boys came to tell me he chased a goblin into the woods. They have a two-hour headstart on us.”

Track Caleb through the woods. If the trail goes cold, find the local goblin warren and do whatever is necessary to return Caleb home safely.

Caleb did chase a goblin into the woods, but the goblin proved to be much more failure with the forest and quickly evaded the boy.

Caleb continued to walk in the direction of what he thought was home. Late into the night, tired and hungry, the boy curled up under a fallen tree for shelter and slept until the first rays of dawn started to fill the sky.

After many more hours of wandering through the woods, the young boy encountered a Centaur named Faren.  Faren let Caleb know that he must have gotten turned around in the forest and was heading in the wrong direction. As night was falling soon and Caleb’s home was too far to reach before dark, Faren and Caleb returned to the Centaur’s village with the promise that the Centaur would take the boy home in the morning.

If Faren escorts Caleb all the way home without encountering the party, he will give Caleb the Ring of Egon to help him never get lost again.

The goblin warren is the likely first destination for the party. The goblins are not on good terms with the humans, but they are not looking for a fight either. They are sandwiched between the human settlement, a group of bandits, and a centaur settlement. Expanding their territory in any direction takes them into direct conflict. If the party can get rid of the bandit camps, the goblins will promise to stop raiding the human settlement for food and other supplies. See random encounter chart below for the bandit info.

A hex crawl is a wilderness exploration and survival adventure. This is time for the Ranger to step up and lead the party. If your party doesn’t have a ranger or anyone with good wilderness survival skills, a hex crawl can become a fight for survival very quickly. Jonathan Pruitt and Jim Davis have put together a great introduction to hex crawls that I highly recommend you watch if you are new to DM’img.

If you have never personally been to the redwood forest, it is hard to imagine the scale of the trees. Even the modern redwoods are dwarfed by many of the trees that lived before humans came along with axes and saws. Spend a few minutes looking at photos of the redwoods so you can get a sense of their scale.

Google Photos:
Redwood Forest
Largest Living Redwoods
No, they are even bigger than you think…

This redwood forest is extremely large and home to some extremely large creatures. A dragon may be seen flying overhead and hill giant tracks may be found while traveling. Because players seldom know their limits when it comes to choosing their battles, I don’t recommend putting any of these giant class creatures within the reach/danger zone of the party.

If you need some NPCs for the adventure, here are a few.

You should roll for random encounters for every 4 hours of time spent in the woods. Roll a 1d6, when you roll a 6, roll 1d20 for the encounter table below.

All creatures are also taken from the basic rules and/or Monster Manual.

Below you will find some miscellaneous treasures that the characters may find after defeating a particularly difficult monster.

Below you will find links to various sources for maps that could be used for this adventure. Feel free to make your own maps or integrate this adventure into your own homebrew setting.