Princess in a Tower

A family-friendly adventure for 1 to 4 characters of 1st to 5th levels.

This adventure was designed for a single character of 1st to 5th level. It’s recommended that the combined character levels equal at least 5. This adventure relies on role play, exploration, problem-solving, and a skill challenge. There is the opportunity for combat at several stages of the adventure.

This adventure was inspired by a Nerdarchy video and Patrick Rothfuss who both showed me how fun and easy it is to turn a classic fairy tale on its head.

Many a brave adventurer has set off into those woods in search of the witches’ tower where the princess and heir to the throw of our neighboring kingdom has been imprisoned since she was a young girl. It’s said that the tower is guarded by an evil dragon.

One young adventurer survived to tell the story of his encounter with the dragon so huge, it slept curled around the entire tower. He described the collapsed ruins with one tall tower still standing. The dragon guards more than just the beautiful princess. It guards a huge treasure made up of all the armor, swords, and money carried by all the adventures that have ever try rescuing the fair maiden.

The young man drew a map to a ruined castle in the middle of the dense forest and sold it to the innkeeper. For a small price, the innkeeper will sell you a copy.

There are several ways you can turn this story on its head. Each alternate version of the story provides different complications and opportunities.

For our version of the adventure, we are going with… The dragon is the princess. She doesn’t want to fight or hurt the adventurers, but the witch cast a spell on her, forcing her to defend the tower and everything in it.

With map in hand, the adventurer need only negotiate the wilderness and the dangers that hide within. See the Random Encounters below.

I also recommend a couple of skill challenge obstacles along the way. Here are a couple of options. These are fail-forward obstacles. They won’t stop the adventure, just slow it down and cause the loss of some equipment and maybe some hit points. 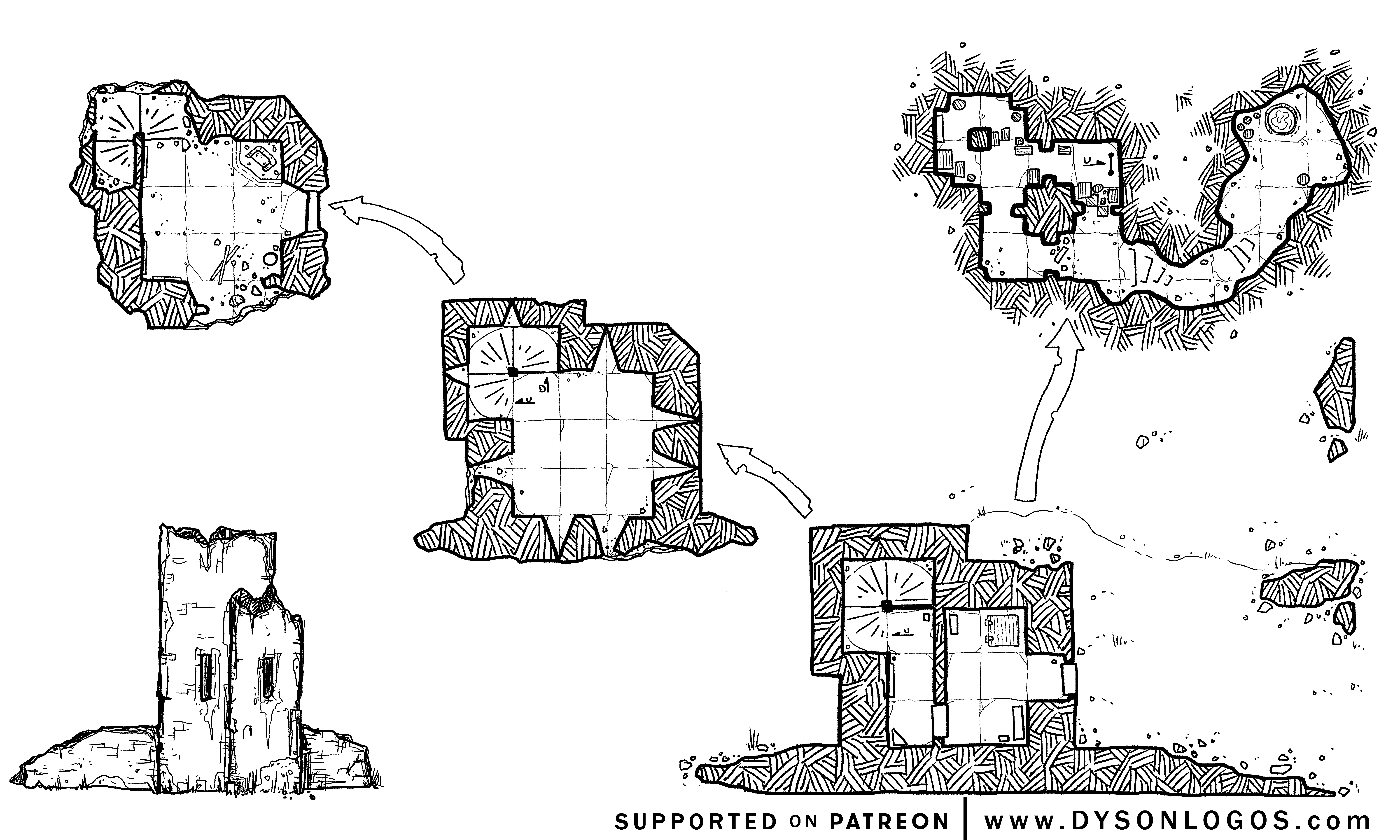 Tower may by Dyson Logos. (https://dysonlogos.blog/maps/commercial-maps/)

DANGER!!! A dragon can kill a fourth-level character with one attack. Direct combat with a dragon is a really bad idea for the player. Encourage them to find alternative ways to solve this part of the adventure.

If they choose to fight anyway, the dragon will use its Frightful Presence to scare the adventurer away instead of attacking. You can also scale the damage output for the character level. If the character runs out of hitpoints, see my article on Removing Death from Dungeons & Dragons.

Being forced to fight, the dragon will announce her attacks before using them. For example, “Let’s see if you can dodge my breath weapon!” Having foreknowledge of the coming attack gives the adventurer advantage (roll 2d20 and take the highest) on their roll to dodge.

The stats below are provided for games with older kids and parties of more than one character. For younger players or players at low levels, I recommend the # of hits method for combat. Basically, figure out how many “solid” hits are needed before the dragon “goes down.” You can still have the player roll dice for damage, but you really don’t need to keep track of hitpoints.

DANGER! Rosaline is a glass cannon. She can easily kill a single fourth-level character, but can’t take much damage.

The witch uses Misty Step to come and go from the castle because the dragon will attack her if she’s given the chance. The player character will see her do this when they first arrive. This gives the PC time to observe her and maybe set a trap/ambush for her.

Battle Strategy: Rosaline would prefer to not do battle if possible. If she detects the PC coming, she will attempt to cast Sleep on him/her. If the Sleep spell doesn’t work, she will use Disguise Self to make herself look like a beautiful princess then use Hold Person at the first opportunity. If forced into close combat, she will use Burning Hands or Shocking Grasp. Her goal will be to use Misty Step to put distance between her and the PC then use Fireball to finish the PC off.

Description: Rosaline wears what was once a very beautiful dress fit for a princess, but it has long since suffered many rips, tears, stains, and smells of body odor. She is muscular with a powerful set of arms. She keeps her long auburn hair kept up in a ponytail. She is surprisingly sunburned and her eyes are piercing gray.

Personality: Confrontational and loud best describe her. She is terrible with names. She forgets people’s names several times before they finally stick; this causes her no end of embarrassment.

History: Born to a poor family in the city she treasured whatever gifts she got. When money was particularly tight she took to the alleyways. She found that a few simple magic spells could get her almost anything she wanted except beauty and love.

Motivation: She wants random interesting trinkets and junk, hates to throw anything away; and a wizard she once robbed is out to get her. She is hiding here in the tower planning her next big move.

The following encounter table is to be used for the road, woods, and grounds of the castle. Most wild animals will flee combat when injured unless they see the player as a potential meal.

All creatures are also taken from the basic rules and/or Monster Manual.


*DMingDad.com is not responsible for content on Wizards.com. If you find the link provided is no longer valid, please use our contact page to let us know.