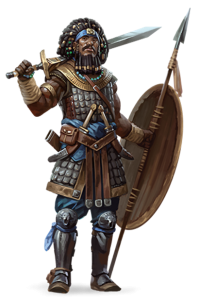 Humans are the youngest of the common races, late to arrive on the world scene and short-lived in comparison to dwarves, elves, and dragons. Perhaps it is because of their shorter lives that they strive to achieve as much as they can in the years they are given. Or maybe they feel they have something to prove to the elder races, and that’s why they build their mighty empires on the foundation of conquest and trade. Whatever drives them, humans are the innovators, the achievers, and the pioneers of the world.

Elves, Dwarves and the other long-lived races of D&D tend to see humans as humans as a young race and distrust them as a rule, mostly because of their short lifespan and precocious nature. In their view, developing a friendship with a human is much like humans building a relationship with a dog. If you they are lucky enough to find one worthy of their friendship, they will soon die. The best that can be hoped for is befriending a human and following their family in the hope of finding a good bloodline, worthy of their patronage.

Of all the human traits, their ability to set their aim upon a goal and focusing upon it to the exclusion of all else is something other races seem to respect. Humans often achieve more within their short lives that many other races achieve in twice the human lifespan. The ability of humans to adapt, learn and achieve mastery over a skill is of great interest to the other races.

One of the things that make humans a desirable race among players is the fact that they get a +1 to ALL stats. The variant human’s ability to get a feat at first level is also very desirable to many players.

For more on the offical stats and abilities of humans, check out DnDBeyond.

Some Practical Advice
Having played D&D for decades, I can tell you that character age plays almost no role in any game, so the short lifespan of humans compared to other races is not a factor you need to consider. Humans and elves will both reach 20th level in the same amount of gameplay.

From a purely mechanical view, getting a +1 to every stat is better than any other character race is going to get. Other races typically get natural armor, skills, and more languages, but human characters can learn these over time. For example, characters can learn new languages during downtime. Based on that rule, players can ask their DM to increase the starting age of the character by one year per language they want to learn.

From a role-playing standpoint, playing a human can seem rather vanilla. After all, we live in a world populated exclusively by humans. Playing a fantastic race adds a lot of role-playing potential. Taking time to imagine how a 300-year-old elf might view a situation can bring a completely new level to the game for players.